See Nine Plays in One Weekend at PT PlayFest 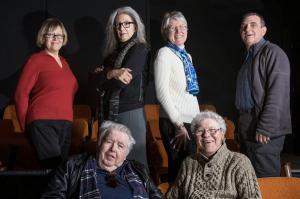 Presented over two weekends, PlayFest offers a unique glimpse behind the scenes of how contemporary plays are created. In addition to open rehearsals, writing workshops, and panels with guest artists, post-play discussions follow every performance event. It is produced by Key City Public Theatre, now in its 56th season.

“It is possible to see nine plays over Festival Weekend, some in different iterations as they are workshopped day-to-day,” says Festival Dramaturg Mara Lathrop.

Immerse yourself with a $35 Festival Pass and enjoy access to all performance events both weekends. The pass is intended to open the door to new theatrical experiences, and to encourage repeated viewings of plays as they evolve over the course of the festival.

Featured guest Richard Dresser, a widely produced playwright and instructor at Rutgers University, attends a special performance of his new play, “100 Years,” at 7:30 p.m., Friday, March 14. The staged reading is followed by a facilitated discussion and an artist reception.

Two notable regional playwrights—Kim Hinton and Jeni Mahoney—are spending a week in residence during PlayFest, workshopping new full-length plays. Each play receives two staged-reading performances during Festival Weekend. These sandwich a 2-1/2 hour “open rehearsal,” where you can drop in and observe the artists at work on the play.

PlayFest is also home to the 6th annual “Here, There & Everywhere,” a celebration of women playwrights from around the world in honor of International Women’s Day. This year’s monologues share themes of mothers and daughters.