In 1792, Captain George Vancouver sailed the ocean blue.  What he found was not the famed Northwest Passage but the stunning inland sea of Puget Sound.  On June 4th, his ships Discovery and Chatham sailed into Saratoga Passage near Mukilteo, where Vancouver took possession of the the Pacific Northwest – “New Georgia” – as a birthday present for King George III.  Charting our shorelines with impressive accuracy, Vancouver literally put our region on the world map.

Happily, this 225th anniversary of Vancouver’s historic exploring expedition coincides with the 2017 Festival of Sail in Tacoma (June 15-18), which brings a grand fleet of tall ships into the Peter Puget’s Sound. Many of these vessels will rendezvous for a commemorative parade of sail on June 13, celebrating the first tall ships in our waters during the administration of George Washington. 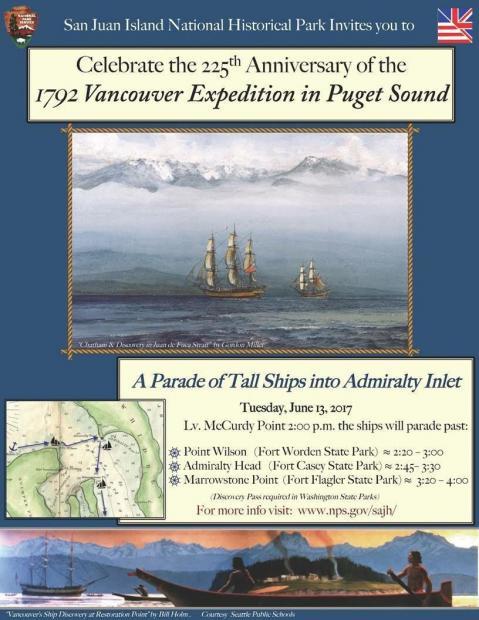 San Juan Island National Historical Park invites you to join us in honoring Britain’s famed navigator and his epic voyage of discovery.  You can witness this rare event – a flotilla of tall ships parading into Admiralty Inlet from three Washington State Parks. The vessels will leave McCurdy Point, east of Protection Island, as close to 2:00 p.m. as possible, and will sail by Point Wilson, Admiralty Head, and Marrowstone Point before continuing on towards Tacoma.

Please note that all times are dependent on conditions.