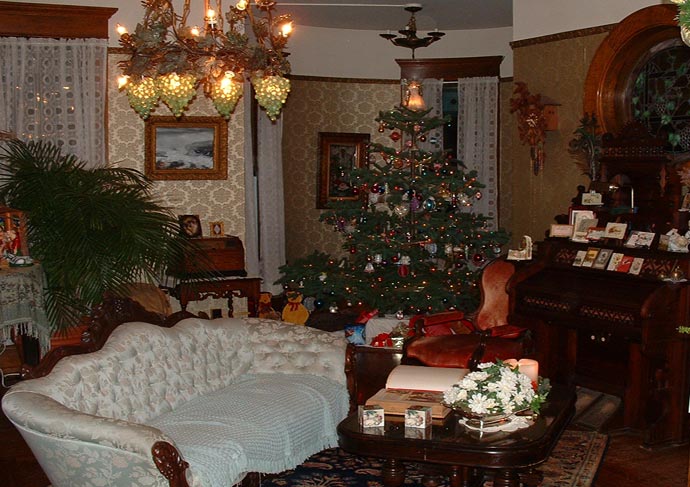 A Holiday Tour of Victorian Homes will be held on the afternoon and evening of Sunday, December 4th from 2:00 to 8:00 p.m. in historic Port Townsend, WA.

Three of the city’s most beautiful Victorians, decorated in elegant holiday finery, will be open for visitors to tour and enjoy. Light holiday refreshments will be served at each of the homes, and seasonal music will add to the holiday atmosphere. Come celebrate the holidays the old fashioned way, visiting with friends, and enjoying music and holiday treats.

The event is presented by the Victorian Society in America – Northwest Chapter. VSA-NW members will act as docents and servers the day of the tour, and will assist with some of the decorating the prior week.

To purchase tickets online, and for additional details visit: www.victoriansociety-northwest.org.

Tickets can also be purchased locally in Port Townsend after November 1st using cash or check ONLY (no credit cards) at the Vintage Hardware Building, 2000 Sims Way. Open seven days a week until 5:00 p.m.

What could be built in Port Townsend in 1887? One could build this lovely two story home, built by James Stockand, a prominent local businessman born in 1861 at the family homestead in Center, just south of Port Townsend. He married a member of one of the pioneer families on Whidbey Island, and built a seven gabled house when he was in his mid-20s. Stockand later served as a member of City Council during some of its most turbulent years in the early 20th Century.

Nearly destroyed through abuse and neglect, rooms were rented to Fort Worden soldiers during WW II. The Stockand house went through a major restoration by previous owners in the late 1970s, earning the coveted local Mary Johnson award for restoration.

This home’s current owners purchased it in 2001, and have lavishly restored and graced it with beautiful antiques collected over many years. Those antiques now have the perfect setting to call home.

The home has been decorated with wallpapers by the pre-eminent decorating firm of Bradbury and Bradbury, and the tall period ceilings are made-to-order for showcasing this traditional look.

This beautiful home commands a spectacular view of Port Townsend Bay from the bluff above downtown.

It was built by Max Gerson, who was born in Culm, Prussia in 1852 and immigrated to the U.S. at the age of 19. He owned and operated a dry goods store on the main floor of the well-known Hastings building at the corner of Water and Taylor streets from 1881 until 1913 when he retired and sold the business. He served as a city councilman for eleven years and as mayor for two years.

Over its 122 year history, modifications to the home have improved its charm for the 21st Century. A cheery kitchen/family room overlooks the water and the Port Townsend ferry dock. The home retains vintage hardware, woodwork, and light fixtures and beautiful original pocket doors between the front parlor and library. French doors in the library lead to a deck that shares the stunning view.

In the early 1890s, as the population of Port Townsend approached the 7,500 mark, the promised railroad, already under construction veered east to terminate in Seattle instead of Port Townsend. At about the same time, the rest of the country slid into a period of financial depression, and the city’s dreamers of a New York of the Pacific Northwest died on the vine. Construction was halted with the home only half finished inside.

In the midst of the depression, the Hastings house and carriage house and six lots on the block were purchased at auction by Mr. & Mrs. Olsen, and construction of the house was finally completed in 1904. It was known to have been the first private home in Port Townsend to have electrical lights, a noteworthy feature in the day. To make ends meet, the couple took in a number of boarders, including the acting German consul, from which the Inn takes its name as the Old Consulate.

New owners who began their operations this past summer, are now welcoming guests and Holiday Home Tour ticket holders to the place they proudly call home.