Ring in 2018 with fun, art, history, champagne toasts and strange brews in January!

As the holiday season winds down, celebrate the end of 2017 and the promise of 2018 at festivities around Port Townsend on New Year’s Eve and New Year’s Day.

Launch your year with fun, frivolity and art! Hear and see the incredible array of creativity, not only with music, and art in the galleries in town, but also in our eateries, shops and accommodations. Port Townsend is known as an arts community and you’ll find the creative spirit is alive and well here. 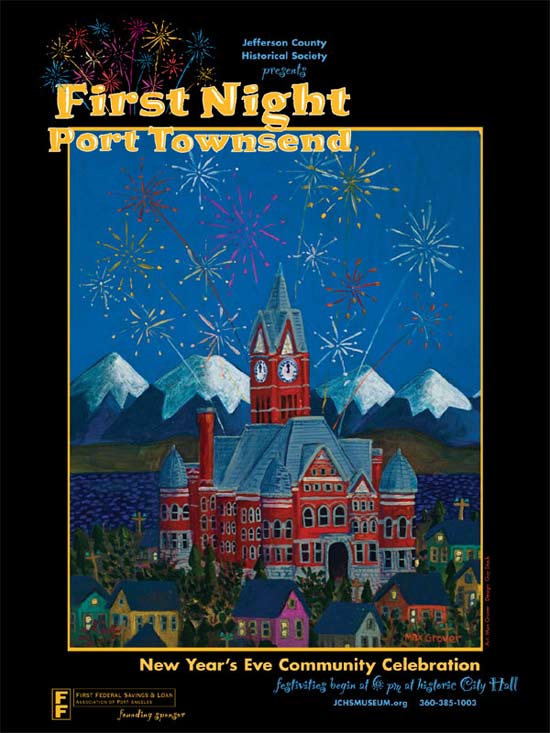 At 9 pm (midnight in New York) Port Townsend will get a head start on the rest of the West Coast and usher in 2018 by raising of an illuminated anchor created by sculptor Thaddeus Jurczynski amid an explosion of brilliant fireworks provided by Dr. David Chuljian launched from Memorial Field.

Admission is by donation, suggested $5 per person or $10 per family. Proceeds benefit Historical Society programs. For a schedule of events, go to http://www.jchsmuseum.org/Programs/FirstNight.html.

Admission passes are now available at the Jefferson Museum of Art & History in historic city hall, 540 Water Street. All pass holders receive a raffle ticket for gift certificates from the Museum Shop and passes to Key City Public Theatre. 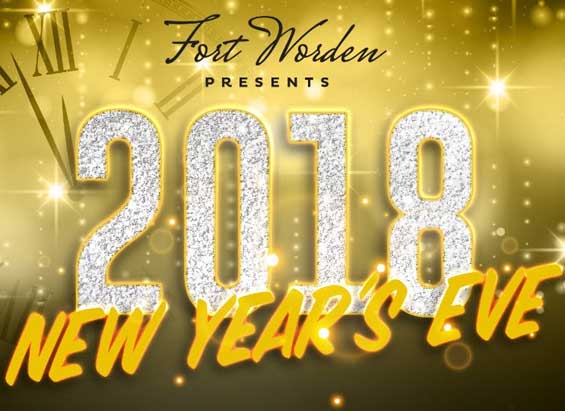 Keep the party going and dance into 2018 at Fort Worden’s historic USO Hallfrom 8 pm to 12:30 am. With the clock ticking away, it’s time to slip into your dancing shoes for the high-energy, groovin’ sound of one of Port Townsend’s favorite dance bands—Uncle Funk and the Dope Six.

The ultimate party band, this tightly knit, six-member ensemble rocks an unforgettable set that has the crowd on their feet from the first note to the last chord!

And consider enjoying a scrumptious New Year’s Day Brunch on January 1 at Reveille at the Commons. Biscuits and Gravy, Crab Cake Benedict and Blueberry Waffles are just a few favorites. Reservations are recommended by calling 360.344.4400 ext. 318.

January 1 is also a State Parks Free Day, so no Discover Pass is necessary to park at trail heads. Hit the trails at Fort Worden after brunch to start the new year with a hike or cycling. 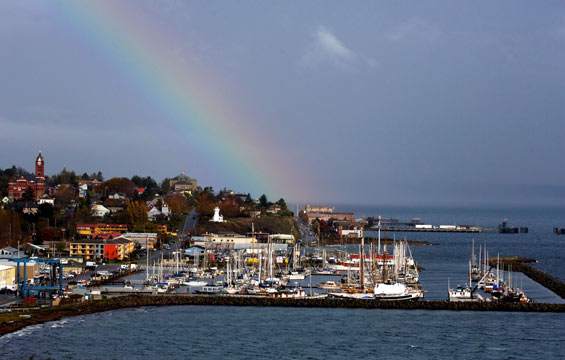 Art Walk is January 6 from 5:30-8 pm where you can indulge your senses with creations from our local artists. PT Shorts is January 6, a free monthly program, featuring dramatic readings of contemporary literature, read by critically acclaimed authors. Readings are produced by Key City Public Theatre, presented in partnership with Northwind Arts Center’s Reading Series. They are held the first Saturday of every month at 7:30 pm, to coincide with the downtown Art Walk. 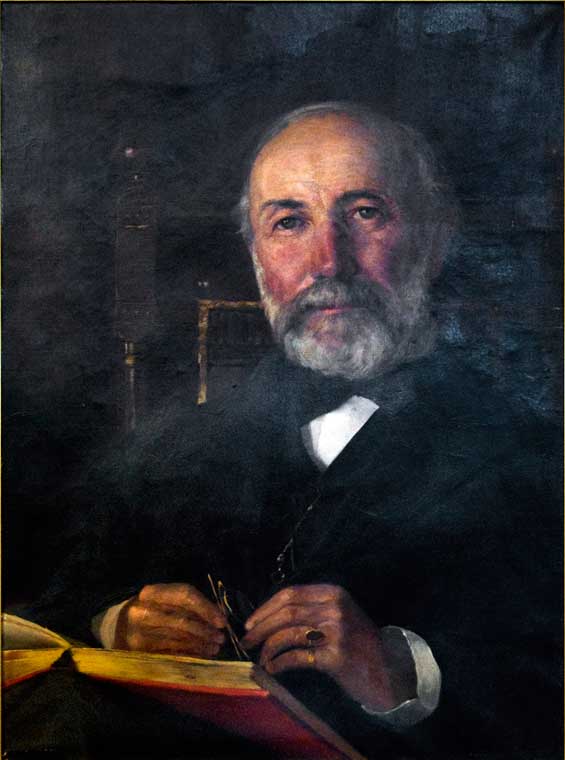 Celebrate the 200th birthday of James Swan, one of Port Townsend’s most colorful and influential early settlers, at the Jefferson County Historical Society on January 11, from 11 am to 4 pm. The new James Swan exhibit will open in the Women’s Jail Cell Gallery at the Jefferson Museum of Art & History, and the publication of Recipes and Recollections of James G. Swan by Steve and Gloria Ricketts will be featured. This includes an assortment of recipes which Swan collected, some from well-known early Port Townsend matrons.

Swan arrived in Port Townsend in 1859, not long after its founding in 1851. Port Townsend was his base, and Swan collected more than recipes. One of his many jobs and interests was compiling the ethnology and collecting artifacts of the Northwest natives for the Smithsonian Institution. In the process, he acquired his own collection of native art. Some of this collection, as well as other possessions of Swan’s, will be part of this new exhibit. 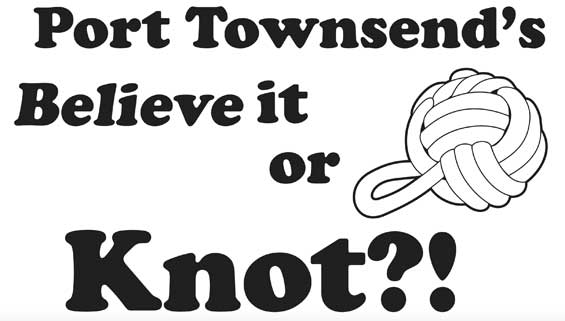 From January through June, play the Port Townsend “Believe or Knot!” Game—a fun excuse to come downtown, pique your interest in unbelievable facts (or fiction!) about the salty seaport of Port Townsend. Complete the game and be entered in prize drawings. For more info, go to www.ptmainstreet.org/i-love-port-townsend/ 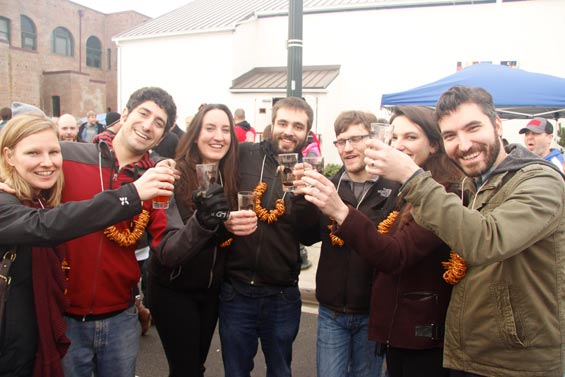 There’s no time for winter blues—bring on the strange brews and plan to attend the 14th Annual Strange Brewfest, Jan. 26-27, boasting wildly inventive, palate-challenging craft brews featuring over 30 breweries and cideries, along with over 60 brews on tap.

Strange Brewfest 14, is the Mount Olympus of beer festivals, as the 14th version of Port Townsend’s ode to Northwest brewers and their imaginations lets you party like Greek Gods and Goddesses!

This iconic festival is an indoor-outdoor event based in downtown Port Townsend at the American Legion Hall in our National Historic Landmark District. 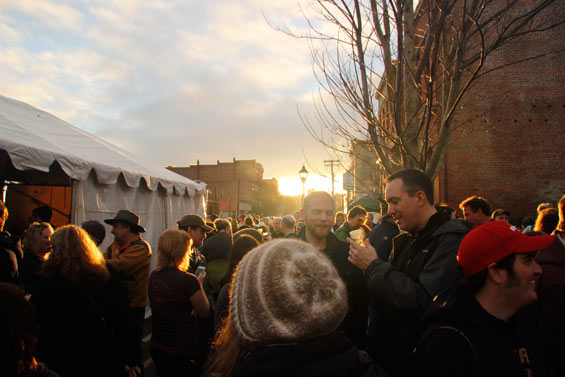 Taste is not the only sense that Strange Brewfest 14 will tempt. Be dazzled by the sights and sounds of the weekend with a continuous lineup of rockin’ music. Indulge in the carnival-like atmosphere that this festival is known for and enjoy its tasty food, too.

Admission to Strange Brewfest 14 is $30/person (21+) which gives you a souvenir tasting glass, four tasting tokens and a wristband for both days. Additional tasting tokens are $1.50 each. Make reservations for accommodations soon as Port Townsend gets sold out quickly for this event!

Save the date for upcoming events in February and March:

We look forward to welcoming you to Port Townsend in 2018! Wishing you a bright and beautiful Happy New Year!