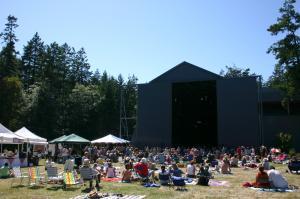 August 2-3, 2013, Centrum presents the Port Townsend Acoustic Blues Festival, the largest gathering of country blues west of the Mississippi. Led by Artistic Director Daryl Davis, the Festival turns the Victorian seaport and arts community of Port Townsend into the summer destination for the blues.

The Festival’s mainstage shows take place at Fort Worden State Park’s McCurdy Pavilion—a renovated WWI-era balloon hangar that has been converted into a 1,200-seat performance hall. Smaller, more intimate performances will take place in Port Townsend’s intimate downtown clubs and restaurants. The mainstage and club performances serve as the public capstone to a weeklong blues workshop attended by 225 blues participants from all over the country.

“Acoustic blues, also called traditional, pre-war or country blues is the original music of rural African-Americans that originated in the Southern USA in the 1920’s and 1930’s,” said Centrum blues program manager Mary Hilts. “Traditional blues honors the commonality of the human spirit and shares its sorrow and its joy. Centrum is honored to present musicians who are keeping the country blues traditions alive. We have flown them in from across the country to share with you the heritage of traditional blues.”

“The acoustic blues tradition is as American as apple pie,” said Centrum executive director Robert Birman. “No destination in the country offers as much diversity or wealth of talent on one stage as will be represented at our Saturday afternoon, August 3rd Blues Showcase at McCurdy Pavilion. In addition, our Friday and Saturday night club dates downtown are the epitome of integrity and authenticity. It’s all at our doorstep in Port Townsend this week only. I hope to see you with us!”