R2AK is the first of its kind, and North America’s longest human and wind-powered race. First place is $10,000 and second place is a set of steak knives.

The Race to Alaska (R2AK) was born in the spirit of tradition, exploration and the lawless self-reliance that defines the sea-faring journey through the Inside Passage. 750 miles. No motors. No support. All the way to Alaska. R2AK is the first of its kind and North America’s longest human and wind-powered race. First place is $10,000 and second place is a set of steak knives. 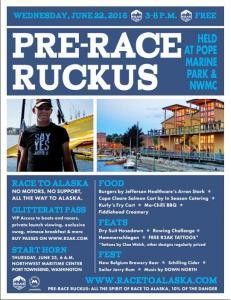 The race starting horn blares at 6am on Thursday, June 23, 2016, with public viewing areas open at the Northwest Maritime Center.

R2AK is like the Iditarod, on a boat, with a chance of drowning, or being run down by a freighter, or being swallowed by a whirlpool. There are squalls, killer whales and tidal currents that run upwards of 20 miles per hour. There’s also some of the most beautiful scenery on earth—as well as a wicked block party to kick the insanity off!

The night before, the R2AK Pre-Race Ruckus is Wednesday, June 22, 2016, from 3-8pm. The Ruckus is free and open to everyone. Beyond great food, drinks, and Seattle soul band Down North performing, the Ruckus will also feature a fire-hose rodeo, various feats of strength, free R2AK tattoos (yep, the permanent kind), and your chance to check out all the amazing race boats—including a 70’ trimaran that may very well break the world record for fastest time to Alaska! To join the fun and track the boats once they’re en route, go to www.r2ak.com.